How are Plastics Made? 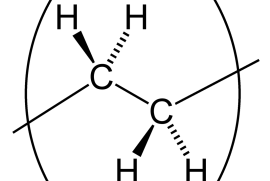 Plastics are derived from organic materials such as crude oil, natural gas, salt, coal and, in more recent years, from bio-matter. Many thousands of different polymers are created through combining different organic chemicals together in a number of ways.

The term 'plastic' comes from the Greek work 'plastikos' which means 'to mold' or 'to form'. Plastic is a material that can be molded into shape and then set. It is made out of very long molecule chains called 'polymers'. Chemists take the basic building blocks, or monomers, and join them together to form the polymer chains. The structure and length of these chains dictate the properties of the plastic created.

A good example of a polymer is polyethylene. Ethylene (ethane) is the monomer. When lots of ethylene molecules are joined together end-to-end in a chain by a chemical reaction the poly-ethylene is formed.

The compounds in the organic feedstocks for plastic have different masses, and therefore boild at different temperatures. It is therefore possible to separate them by a process known as fractional distillation. The mixture is separated into fractions, not into individual compounds. Fractions contain a mixture of compounds whose boiling temperatures are similar.

Cracking breaks large molecules into smaller ones. These smaller molecules are more useful, and therefore of greater value. For example, very high boiling point fractions are cracked to produce gasoline and gas oild fractions. Today most cracking uses catalysts, but some heat treatment still occurs. Purity of the final molecules is also a key consideration as unwanted compounds in the final molecular structure are contaminants that can weaken, or change, the behaviour of the material.

The process of joining the monomers together into a chain is known as polymerisation. There are two basic methods of polymerisation; addition and condensation. Note that when only one monomer is used in a reaction the end result is called a homopolymer but when two or more different monomers are used to make one chain, the resulting product is called a copolymer.

The polymer is made from one monomer e.g A-A produces A-A-A-A-A-A-A-A-A-A-A. In addition reaction, chains are formed from one small molecule. The monomer always contains a carbon-carbon double bond. Most thermoplastics made from naptha are addition polymers e.g. polyethylene, polypropylene, polystyrene.

The polymer is made from two monomers e.g. A-A and B-B produce A-B-B-A-A-B-B-A-. In condensation reactions, chains are formed from two small molecules. During the reaction a small molecule such as water is formed and removed (condensed out). All thermosetting polymers are condensation polymers, for example, formaldehyde-based plastics and epoxides. Some thermoplastic polymers are also condensation polymers. Examples are Nylon and polyethylene terephthalate (PET).