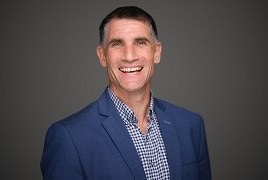 Kevin Biggar was a strategy consultant with The Boston Consulting Group when an unusual pizza ordering experience triggered a quarter life crisis. Finding himself spending too much time sitting on the sofa he decided to take part in the trans-Atlantic Rowing Race, a 5000km epic between the Canary Islands and Barbados in a 7m plywood dinghy and one of the world’s toughest endurance events.

Kevin decided that he was going to win - an ambitious goal given that he had never rowed before! His secret weapon was his business skills which he used to great effect, identifying and innovating on the most critical elements of the preparations. In a desperate and thrilling race he not only went onto win but also set a new world record.

In 2007 he teamed up again with his rowing partner for another expedition – this time to Antarctica. Kevin battled temperatures as cold as minus forty degrees, frostbite, crevasses, whiteouts and gear failure. Finally, after fifty two days of hauling their sleds, they reached the South Pole unsupported a feat only a few dozen people have achieved.

Everyone can relate to sitting on the sofa wondering what to do next or being daunted by an enormous challenge. So audiences of all backgrounds are fascinated as Kevin relates his formula for transformation and illustrates his points with hilarious stories from his adventures - a combination that leaves them feeling entertained and empowered.

Kevin has science degrees from Auckland and Cambridge University and has worked in international economics for the Treasury, in strategy roles for The Boston Consulting Group and Telecom NZ, and as the CEO of a software start-up. Kevin has written or co-written three books ‘The Oarsome Adventures of a Fat Boy Rower’ (the Sunday Star Times best sports book of 2008) ‘Escape to the Pole’ (2010), and ‘First Crossings’ all published by Random House. Kevin was the host of the TVNZ series ‘First Crossings’ and ‘Intrepid NZ’ recreating historic adventures in NZ.

Kevin is married to a doctor. Enjoys kite-surfing, parapenting, gliding, and most other activities that involve adrenaline.